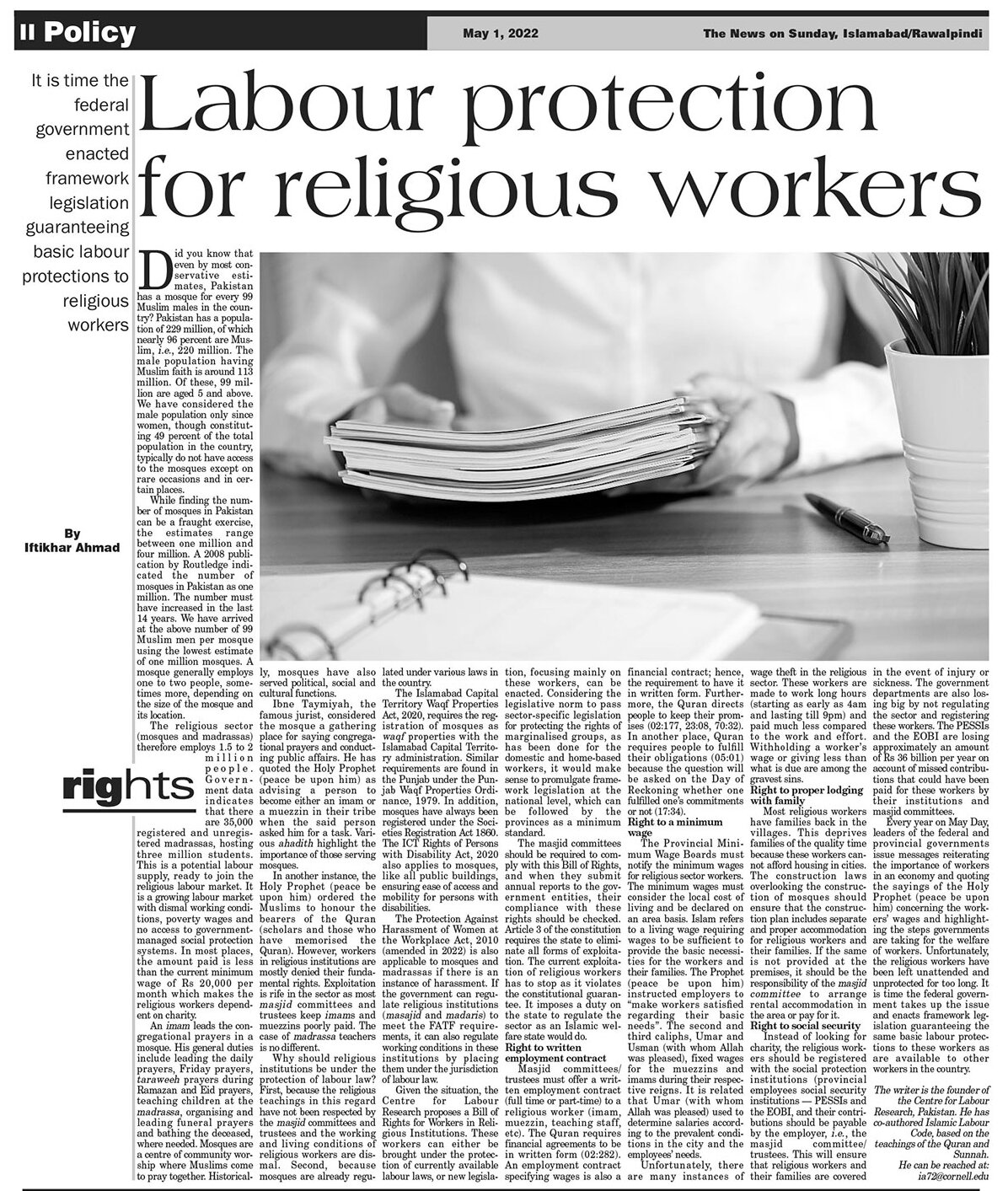 Did you know that even by most conservative estimates, Pakistan has a mosque for every 99 Muslim males in the country? Pakistan has a population of 229 million, of which nearly 96 percent are Muslim, i.e., 220 million. The male population having Muslim faith is around 113 million. Of these, 99 million are aged 5 and above. We have considered the male population only since women, though constituting 49 percent of the total population in the country, typically do not have access to the mosques except on rare occasions and in certain places.

While finding the number of mosques in Pakistan can be a fraught exercise, the estimates range between one million and four million. A 2008 publication by Routledge indicated the number of mosques in Pakistan as one million. The number must have increased in the last 14 years. We have arrived at the above number of 99 Muslim men per mosque using the lowest estimate of one million mosques. A mosque generally employs one to two people, sometimes more, depending on the size of the mosque and its location.

Pakistan has a mosque for every 99 Muslim males in the country?

The religious sector (mosques and madrassas) therefore employs 1.5 to 2 million people. Government data indicates that there are 35,000 registered and unregistered madrassas, hosting three million students. This is a potential labour supply, ready to join the religious labour market. It is a growing labour market with dismal working conditions, poverty wages and no access to government-managed social protection systems. In most places, the amount paid is less than the current minimum wage of Rs 20,000 per month which makes the religious workers dependent on charity.

An imam leads the congregational prayers in a mosque. His general duties include leading the daily prayers, Friday prayers, taraweeh prayers during Ramazan and Eid prayers, teaching children at the madrassa, organising and leading funeral prayers and bathing the deceased, where needed. Mosques are a centre of community worship where Muslims come to pray together. Historically, mosques have also served political, social and cultural functions.

Ibne Taymiyah, the famous jurist, considered the mosque a gathering place for saying congregational prayers and conducting public affairs. He has quoted the Holy Prophet (peace be upon him) as advising a person to become either an imam or a muezzin in their tribe when the said person asked him for a task. Various ahadith highlight the importance of those serving mosques.

In another instance, the Holy Prophet (peace be upon him) ordered the Muslims to honour the bearers of the Quran (scholars and those who have memorised the Quran). However, workers in religious institutions are mostly denied their fundamental rights. Exploitation is rife in the sector as most masjid committees and trustees keep imams and muezzins poorly paid. The case of madrassa teachers is no different.

Why should religious institutions be under the protection of labour law? First, because the religious teachings in this regard have not been respected by the masjid committees and trustees and the working and living conditions of religious workers are dismal. Second, because mosques are already regulated under various laws in the country.

The Islamabad Capital Territory Waqf Properties Act, 2020, requires the registration of mosques as waqf properties with the Islamabad Capital Territory administration. Similar requirements are found in the Punjab under the Punjab Waqf Properties Ordinance, 1979. In addition, mosques have always been registered under the Societies Registration Act 1860. The ICT Rights of Persons with Disability Act, 2020 also applies to mosques, like all public buildings, ensuring ease of access and mobility for persons with disabilities.

The Protection Against Harassment of Women at the Workplace Act, 2010 (amended in 2022) is also applicable to mosques and madrassas if there is an instance of harassment. If the government can regulate religious institutions (masajid and madaris) to meet the FATF requirements, it can also regulate working conditions in these institutions by placing them under the jurisdiction of labour law.

Given the situation, the Centre for Labour Research proposes a Bill of Rights for Workers in Religious Institutions. These workers can either be brought under the protection of currently available labour laws, or new legislation, focusing mainly on these workers, can be enacted. Considering the legislative norm to pass sector-specific legislation for protecting the rights of marginalised groups, as has been done for the domestic and home-based workers, it would make sense to promulgate framework legislation at the national level, which can be followed by the provinces as a minimum standard.

The masjid committees should be required to comply with this Bill of Rights, and when they submit annual reports to the government entities, their compliance with these rights should be checked. Article 3 of the constitution requires the state to eliminate all forms of exploitation. The current exploitation of religious workers has to stop as it violates the constitutional guarantee. It imposes a duty on the state to regulate the sector as an Islamic welfare state would do.

Masjid committees/ trustees must offer a written employment contract (full time or part-time) to a religious worker (imam, muezzin, teaching staff, etc). The Quran requires financial agreements to be in written form (02:282). An employment contract specifying wages is also a financial contract; hence, the requirement to have it in written form. Furthermore, the Quran directs people to keep their promises (02:177, 23:08, 70:32). In another place, Quran requires people to ful ll their obligations (05:01) because the question will be asked on the Day of Reckoning whether one ful lled one’s commitments or not (17:34).

Right to a minimum wage

The Provincial Minimum Wage Boards must notify the minimum wages for religious sector workers. The minimum wages must consider the local cost of living and be declared on an area basis. Islam refers to a living wage requiring wages to be suf cient to provide the basic necessities for the workers and their families. The Prophet (peace be upon him) instructed employers to “make workers satis ed regarding their basic needs”. The second and third caliphs, Umar and Usman (with whom Allah was pleased), fixed wages for the muezzins and imams during their respective reigns. It is related that Umar (with whom Allah was pleased) used to determine salaries according to the prevalent conditions in the city and the employees’ needs.

Unfortunately, there are many instances of wage theft in the religious sector. These workers are made to work long hours (starting as early as 4am and lasting till 9pm) and paid much less compared to the work and effort. Withholding a worker’s wage or giving less than what is due are among the gravest sins.

Right to proper lodging with family

Most religious workers have families back in the villages. This deprives families of the quality time because these workers cannot afford housing in cities. The construction laws overlooking the construction of mosques should ensure that the construction plan includes separate and proper accommodation for religious workers and their families. If the same is not provided at the premises, it should be the responsibility of the masjid committee to arrange rental accommodation in the area or pay for it.

Instead of looking for charity, the religious workers should be registered with the social protection institutions (provincial employees social security institutions — PESSIs and the EOBI, and their contributions should be payable by the employer, i.e., the masjid committee/ trustees. This will ensure that religious workers and their families are covered in the event of injury or sickness. The government departments are also losing big by not regulating the sector and registering these workers. The PESSIs and the EOBI are losing approximately an amount of Rs 36 billion per year on account of missed contributions that could have been paid for these workers by their institutions and masjid committees.

Every year on May Day, leaders of the federal and provincial governments issue messages reiterating the importance of workers in an economy and quoting the sayings of the Holy Prophet (peace be upon him) concerning the workers’ wages and highlighting the steps governments are taking for the welfare of workers. Unfortunately, the religious workers have been left unattended and unprotected for too long. It is time the federal government takes up the issue and enacts framework legislation guaranteeing the same basic labour protections to these workers as are available to other workers in the country.