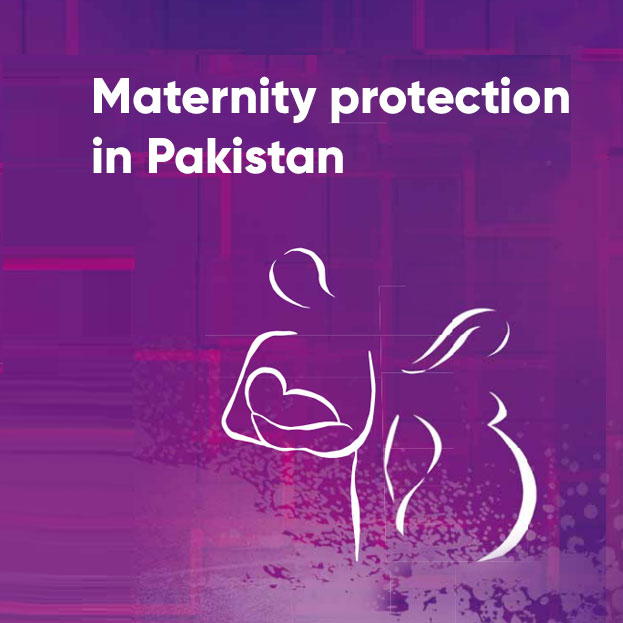 More than 100 years ago, the International Labor Organization adopted the Maternity Protection Convention 1919 (No 3) suggesting 12 weeks of paid maternity leave, free healthcare during and after pregnancy, protection from dismissals and periodic nursing breaks.

Pakistan still lacks compliance to this “outdated” Convention except on the number of 12-week maternity leave and free medical care. There is no protection from dismissals, and nursing breaks are still not provided under the law.

Should the above-referred reform – the increased maternity and paternity leave – be extended to the private sector? Let’s consider some basic facts before we answer this question.

The female labour force participation rate (FLFPR) in Pakistan is one of the lowest in the world, comparable only with the Middle East. The FLFPR further declined from 22 percent in 2015 to 20 percent in 2018. Even the augmented participation rate, accounting for women participation in housekeeping and other generally non-covered activities, is 35 percent. The unemployment rate for women (8.3 percent) is 1.6 times higher than that of men (5 percent). The unemployment rate for women in urban areas is 17.5 percent. The total fertility rate is 3.6 percent while the median birth interval is 28 months.

Pakistan’s maternity benefits legislation guarantees 12 weeks of paid leave (16 weeks in Sindh), to be paid by the employer. Workers can also be registered with the provincial social security institutions (PESSIs); however, monthly contributions are again paid only by the employer (6 percent of worker’s wages). A 2017 report by ILO revealed that only 203,816 workers are registered with PESSIs. PESSIs covers only 16 percent of the women engaged in the formal sector.

While very short maternity leave (less than 12 weeks) makes women workers drop out of the workforce altogether, an extended leave can also lead to wage penalties. Pakistan already has a gender wage gap of 40 percent. The WageIndicator Labour Law Database, maintained by the Centre for Labour Research, already indicates that most countries in the world follow 14-17 weeks of paid maternity leave, as recommended by ILO Convention No 183. Similar is the case of paternity leave. It generally ranges from a couple of days to a maximum of one month. Most countries in the world follow a paternity leave of one to two weeks.

Pakistan can surely learn from these countries and increase maternity leave duration to at least 14 weeks. However, these countries do not make maternity leave an employer liability. Employers in Pakistan have to pay workers their wages during maternity leave, except those registered with PESSIs. Maternity benefits in many countries are financed through general taxation or social insurance system with contributions from employers, employees, and at some places, even governments.

Employer liability schemes work against women workers and at times, women workers of childbearing age are not hired at all. And they are discharged as soon as they get married or pregnant.

While extended maternity and paternity leave is no doubt beneficial for women’s health, child development, as well as building fathers’ connection with children, legislating such a change for the private sector should take into account ground realities. There is no reliable data on the number of women accessing maternity leave and benefits in Pakistan. The law still does not prohibit discrimination on the ground of pregnancy or even mere marital status.

Employers are not precluded from asking female workers to undergo pregnancy testing and then terminating the employment contracts. Employers are not obligated to provide any nursing breaks during working hours. The law does not require registration of every worker with PESSIs and neither the worker nor the government contributes to the system. Daddy months are provided worldwide to help women workers’ smooth return to the job. Unless properly regulated, these lead to increased vacation and leisure time for men. There is no data on how many workplaces provide daycare centres.

Without fixing these issues, merely mandating longer terms of maternity and paternity leave will further aggravate the already sunken female labour force participation. Protection from dismissals during pregnancy, the explicit prohibition of pregnancy testing, sharing maternity leave financing with the employers, and daycare centres at workplaces with more than 30 workers are the first steps.

The writer is the founder of the Centre for Labour Research.

This article was published on February 8th 2020 on TheNews 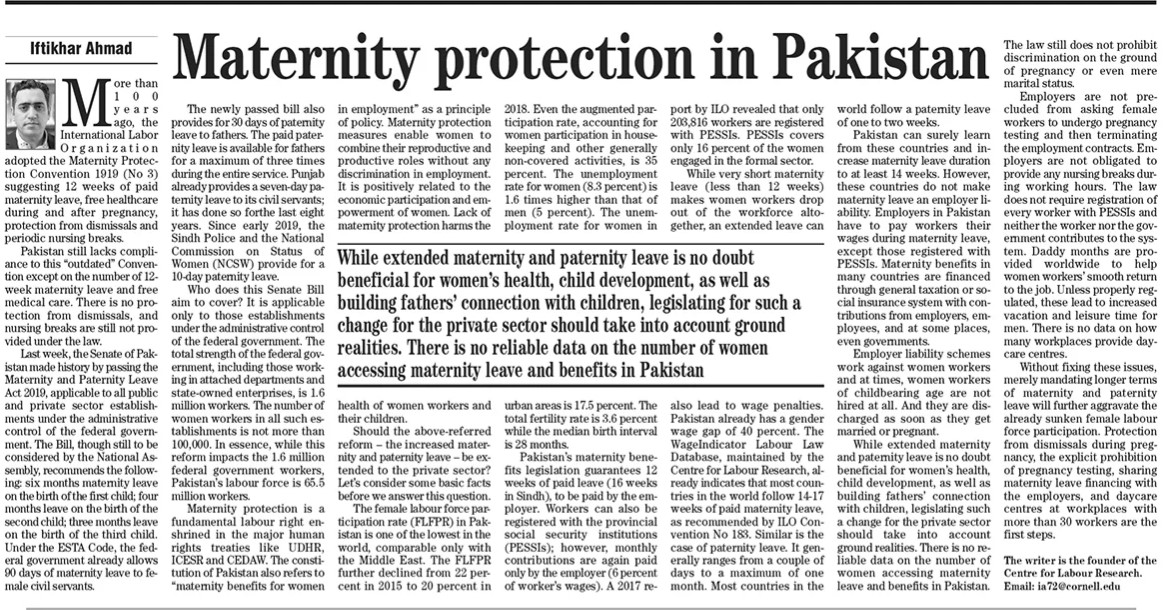 Questions to ask about workers’ rights under CPEC