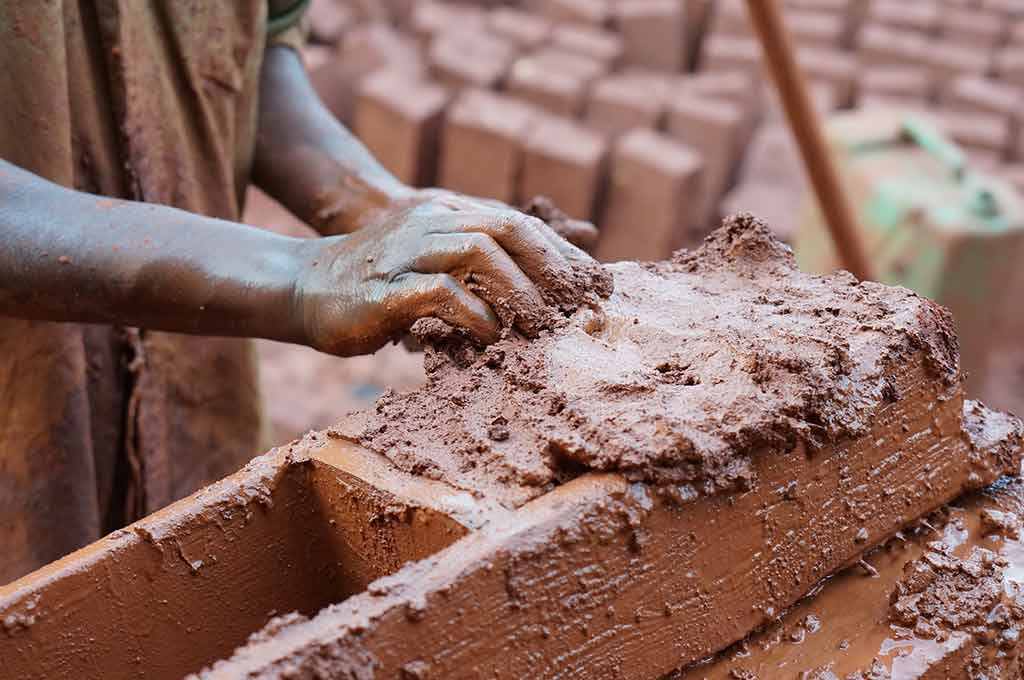 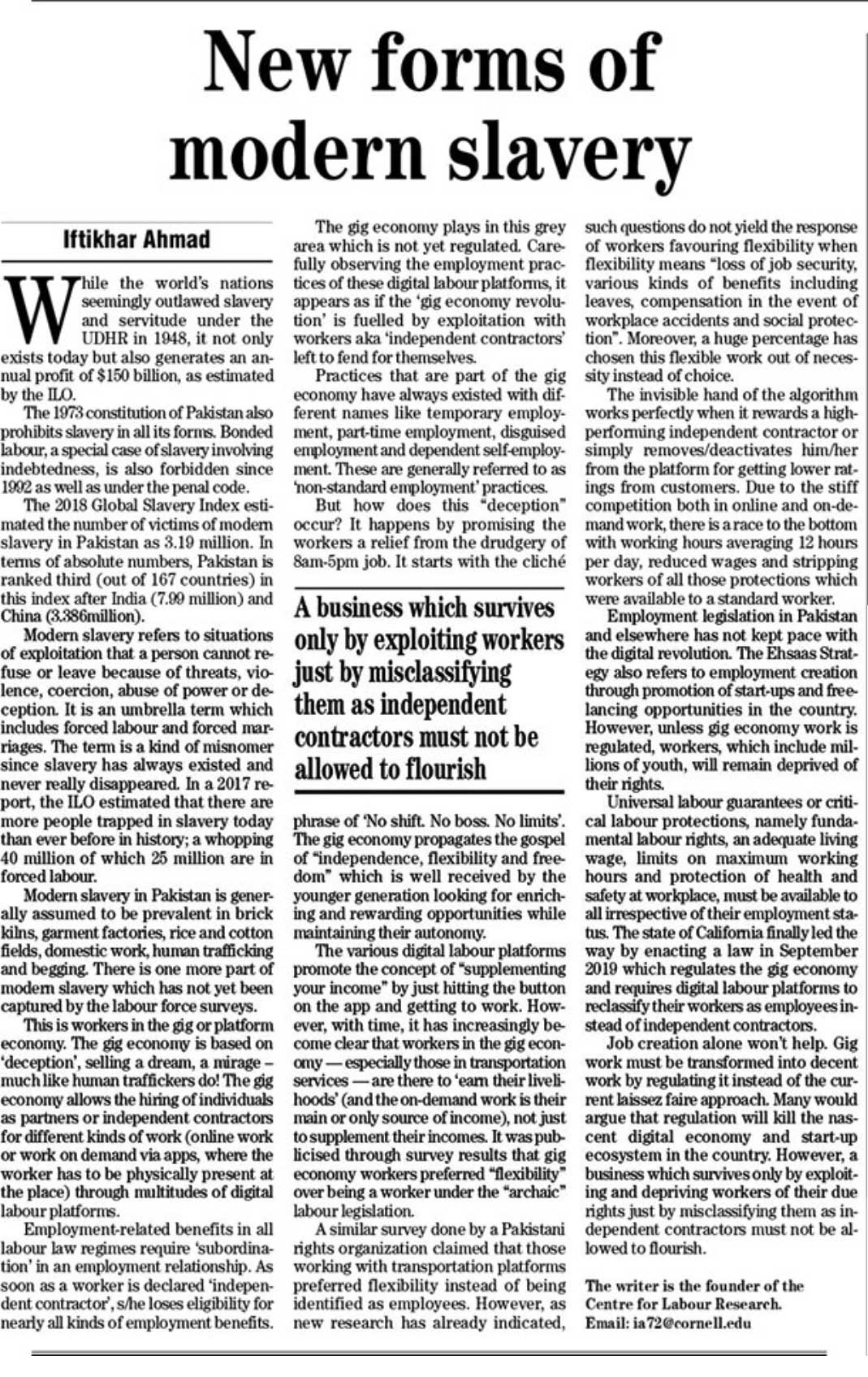 While the world’s nations seemingly outlawed slavery and servitude under the UDHR in 1948, it not only exists today but also generates an annual profit of $150 billion, as estimated by the ILO. The 1973 constitution of Pakistan also prohibits slavery in all its forms. Bonded labour, a special case of slavery involving indebtedness, is also forbidden since 1992 as well as under the penal code. The 2018 Global Slavery Index estimated the number of victims of modern slavery in Pakistan as 3.19 million. In terms of absolute numbers, Pakistan is ranked third (out of 167 countries) in this index after India (7.99 million) and China (3.386million). Modern slavery refers to situations of exploitation that a person cannot refuse or leave because of threats, violence, coercion, abuse of power or deception. It is an umbrella term which includes forced labour and forced marriages. The term is a kind of misnomer since slavery has always existed and never really disappeared. In a 2017 report, the ILO estimated that there are more people trapped in slavery today than ever before in history; a whopping 40 million of which 25 million are in forced labour. Modern slavery in Pakistan is generally assumed to be prevalent in brick kilns, garment factories, rice and cotton fields, domestic work, human trafficking and begging. There is one more part of modern slavery which has not yet been captured by the labour force surveys. This is workers in the gig or platform economy. The gig economy is based on ‘deception’, selling a dream, a mirage – much like human traffickers do! The gig economy allows the hiring of individuals as partners or independent contractors for different kinds of work (online work or work on demand via apps, where the worker has to be physically present at the place) through multitudes of digital labour platforms. read more about protecting gig economy Employment-related benefits in all labour law regimes require ‘subordination’ in an employment relationship. As soon as a worker is declared ‘independent contractor’, s/he loses eligibility for nearly all kinds of employment benefits. The gig economy plays in this grey area which is not yet regulated. Carefully observing the employment practices of these digital labour platforms, it appears as if the ‘gig economy revolution’ is fuelled by exploitation with workers aka ‘independent contractors’ left to fend for themselves. Practices that are part of the gig economy have always existed with different names like temporary employment, part-time employment, disguised employment and dependent self-employment. These are generally referred to as ‘non-standard employment’ practices. But how does this “deception” occur? It happens by promising the workers a relief from the drudgery of 8am-5pm job. It starts with the cliché phrase of ‘No shift. No boss. No limits’. The gig economy propagates the gospel of “independence, flexibility and freedom” which is well received by the younger generation looking for enriching and rewarding opportunities while maintaining their autonomy. The various digital labour platforms promote the concept of “supplementing your income” by just hitting the button on the app and getting to work. However, with time, it has increasingly become clear that workers in the gig economy — especially those in transportation services — are there to ‘earn their livelihoods’ (and the on-demand work is their main or only source of income), not just to supplement their incomes. It was publicised through survey results that gig economy workers preferred “flexibility” over being a worker under the “archaic” labour legislation. A similar survey done by a Pakistani rights organization claimed that those working with transportation platforms preferred flexibility instead of being identified as employees. However, as new research has already indicated, such questions do not yield the response of workers favouring flexibility when flexibility means “loss of job security, various kinds of benefits including leaves, compensation in the event of workplace accidents and social protection”. Moreover, a huge percentage has chosen this flexible work out of necessity instead of choice. The invisible hand of the algorithm works perfectly when it rewards a high-performing independent contractor or simply removes/deactivates him/her from the platform for getting lower ratings from customers. Due to the stiff competition both in online and on-demand work, there is a race to the bottom with working hours averaging 12 hours per day, reduced wages and stripping workers of all those protections which were available to a standard worker. Employment legislation in Pakistan and elsewhere has not kept pace with the digital revolution. The Ehsaas Strategy also refers to employment creation through promotion of start-ups and freelancing opportunities in the country. However, unless gig economy work is regulated, workers, which include millions of youth, will remain deprived of their rights. Universal labour guarantees or critical labour protections, namely fundamental labour rights, an adequate living wage, limits on maximum working hours and protection of health and safety at workplace, must be available to all irrespective of their employment status. The state of California finally led the way by enacting a law in September 2019 which regulates the gig economy and requires digital labour platforms to reclassify their workers as employees instead of independent contractors. Job creation alone won’t help. Gig work must be transformed into decent work by regulating it instead of the current laissez faire approach. Many would argue that regulation will kill the nascent digital economy and start-up ecosystem in the country. However, a business which survives only by exploiting and depriving workers of their due rights just by misclassifying them as independent contractors must not be allowed to flourish. This article was published in The News on October 23, 2019
Tags: gig economy, Global Slavery, ilo, Labour Rights, Mazdoor, UDHR

Is GSP+ status under threat?