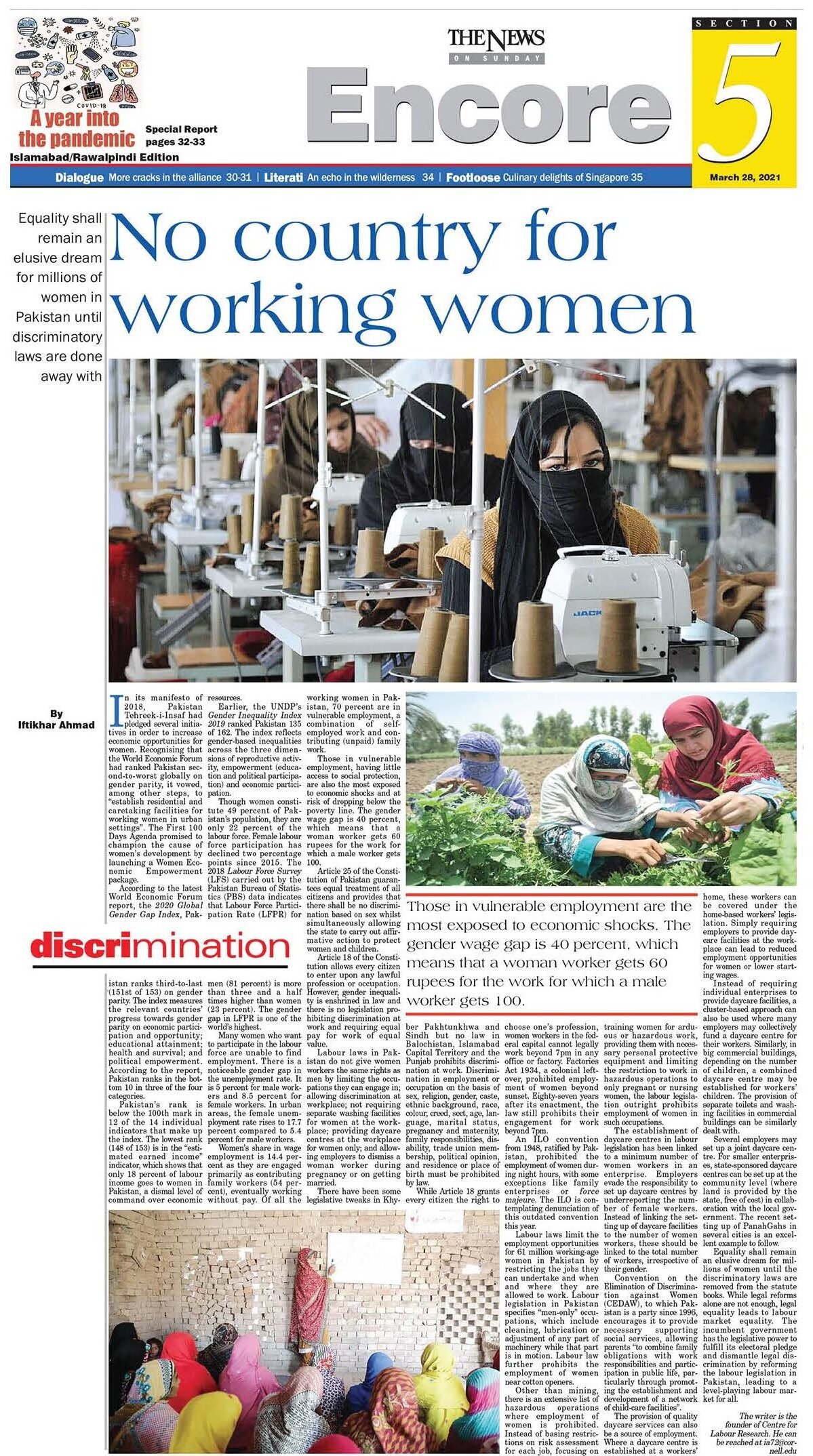 In its manifesto of 2018, Pakistan Tehreek-i-Insaf had pledged several initiatives in order to increase economic opportunities for women. Recognising that the World Economic Forum had ranked Pakistan second-to-worst globally on gender parity, it vowed, among other steps, to “establish residential and caretaking facilities for working women in urban settings”. The First 100 Days Agenda promised to champion the cause of women’s development by launching a Women Economic Empowerment package.

According to the latest World Economic Forum report, the 2020 Global Gender Gap Index, Pakistan ranks third-to-last (151st of 153) on gender parity. The index measures the relevant countries’ progress towards gender parity on economic participation and opportunity; educational attainment; health and survival; and political empowerment. According to the report, Pakistan ranks in the bottom 10 in three of the four categories.

Pakistan’s rank is below the 100th mark in 12 of the 14 individual indicators that make up the index. The lowest rank (148 of 153) is in the “estimated earned income” indicator, which shows that only 18 percent of labour income goes to women in Pakistan, a dismal level of command over economic resources.

Though women constitute 49 percent of Pakistan’s population, they are only 22 percent of the labour force. Female labour force participation has declined two percentage points since 2015. The 2018 Labour Force Survey (LFS) carried out by the Pakistan Bureau of Statistics (PBS) data indicates that Labour Force Participation Rate (LFPR) for men (81 percent) is more than three and a half times higher than women (23 percent). The gender gap in LFPR is one of the world’s highest.

Women’s share in wage employment is 14.4 percent as they are engaged primarily as contributing family workers (54 percent), eventually working without pay. Of all the working women in Pakistan, 70 percent are in vulnerable employment, a combination of self-employed work and contributing (unpaid) family work.

Those in vulnerable employment, having little access to social protection, are also the most exposed to economic shocks and at risk of dropping below the poverty line. The gender wage gap is 40 percent, which means that a woman worker gets 60 rupees for the work for which a male worker gets 100.

Article 25 of the Constitution of Pakistan guarantees equal treatment of all citizens and provides that there shall be no discrimination based on sex whilst simultaneously allowing the state to carry out affirmative action to protect women and children.

Article 18 of the Constitution allows every citizen to enter upon any lawful profession or occupation. However, gender inequality is enshrined in law and there is no legislation prohibiting discrimination at work and requiring equal pay for work of equal value.

Labour laws in Pakistan do not give women workers the same rights as men by limiting the occupations they can engage in; allowing discrimination at workplace; not requiring separate washing facilities for women at the workplace; providing daycare centres at the workplace for women only; and allowing employers to dismiss a woman worker during pregnancy or on getting married.

Those in vulnerable employment are the most exposed to economic shocks. The gender wage gap is 40 percent, which means that a woman worker gets 60 rupees for the work for which a male worker gets 100.

There have been some legislative tweaks in Khyber Pakhtunkhwa and Sindh but no law in Balochistan, Islamabad Capital Territory and the Punjab prohibits discrimination at work. Discrimination in employment or occupation on the basis of sex, religion, gender, caste, ethnic background, race, colour, creed, sect, age, language, marital status, pregnancy and maternity, family responsibilities, disability, trade union membership, political opinion, and residence or place of birth must be prohibited by law.

While Article 18 grants every citizen the right to choose one’s profession, women workers in the federal capital cannot legally work beyond 7pm in any office or factory. Factories Act 1934, a colonial leftover, prohibited employment of women beyond sunset. Eighty-seven years after its enactment, the law still prohibits their engagement for work beyond 7pm.

An ILO convention from 1948, ratified by Pakistan, prohibited the employment of women during night hours, with some exceptions like family enterprises or force majeure. The ILO is contemplating denunciation of this outdated convention this year.

Labour laws limit the employment opportunities for 61 million working-age women in Pakistan by restricting the jobs they can undertake and when and where they are allowed to work. Labour legislation in Pakistan specifies “men-only” occupations, which include cleaning, lubrication or adjustment of any part of machinery while that part is in motion. Labour law further prohibits the employment of women near cotton openers.

Other than mining, there is an extensive list of hazardous operations where employment of women is prohibited. Instead of basing restrictions on risk assessment for each job, focusing on training women for arduous or hazardous work, providing them with necessary personal protective equipment and limiting the restriction to work in hazardous operations to only pregnant or nursing women, the labour legislation outright prohibits employment of women in such occupations. 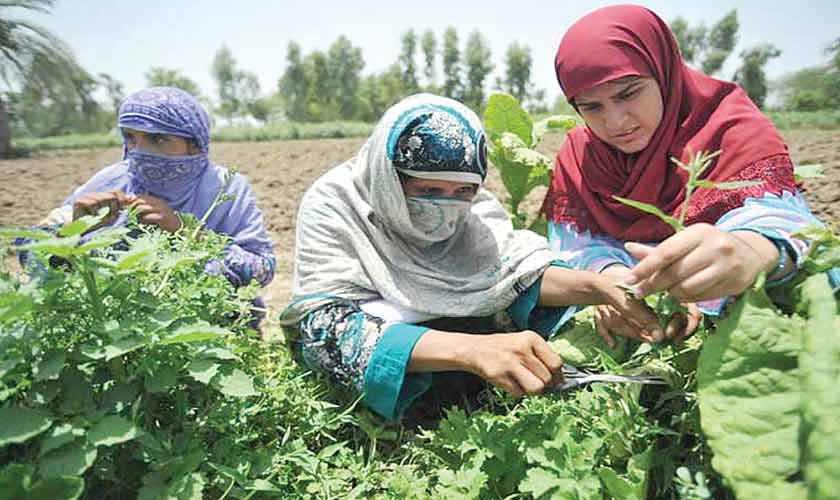 Convention on the Elimination of Discrimination against Women (CEDAW), to which Pakistan is a party since 1996, encourages it to provide necessary supporting social services, allowing parents “to combine family obligations with work responsibilities and participation in public life, particularly through promoting the establishment and development of a network of child-care facilities”.

The provision of quality daycare services can also be a source of employment. Where a daycare centre is established at a workers’ home, these workers can be covered under the home-based workers’ legislation. Simply requiring employers to provide daycare facilities at the workplace can lead to reduced employment opportunities for women or lower starting wages.

Instead of requiring individual enterprises to provide daycare facilities, a cluster-based approach can also be used where many employers may collectively fund a daycare centre for their workers. Similarly, in big commercial buildings, depending on the number of children, a combined daycare centre may be established for workers’ children. The provision of separate toilets and washing facilities in commercial buildings can be similarly dealt with.

Several employers may set up a joint daycare centre. For smaller enterprises, state-sponsored daycare centres can be set up at the community level (where land is provided by the state, free of cost) in collaboration with the local government. The recent setting up of PanahGahs in several cities is an excellent example to follow.

Equality shall remain an elusive dream for millions of women until the discriminatory laws are removed from the statute books. While legal reforms alone are not enough, legal equality leads to labour market equality. The incumbent government has the legislative power to fulfill its electoral pledge and dismantle legal discrimination by reforming the labour legislation in Pakistan, leading to a level-playing labour market for all.