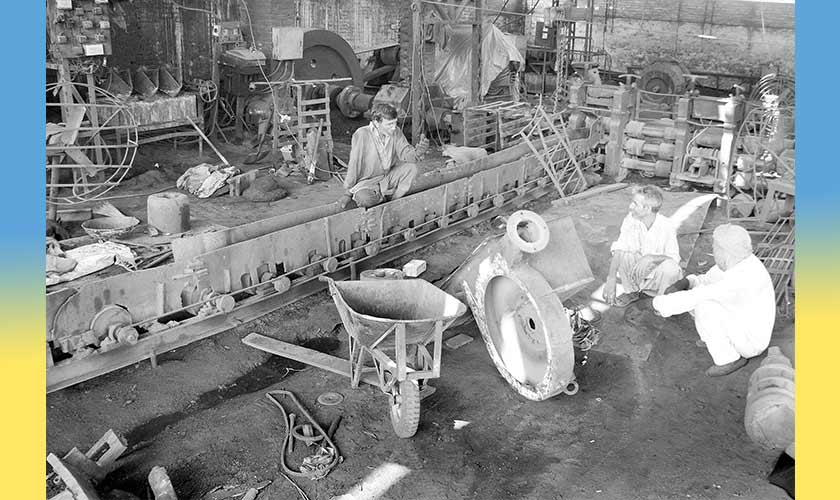 — Photo by Rahat Dar - The News 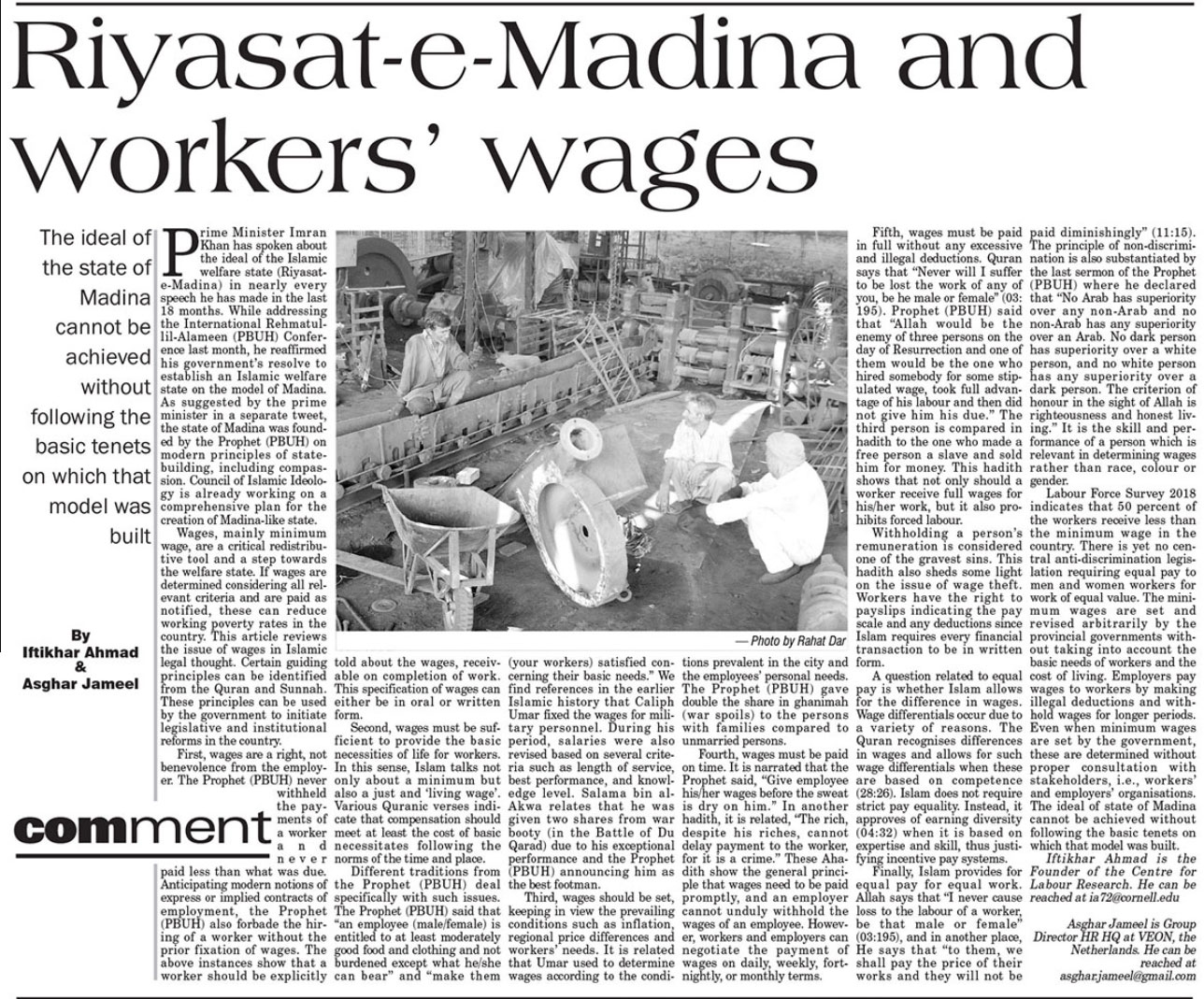 Prime Minister Imran Khan has spoken about the ideal of the Islamic welfare state (Riyasat-e-Madina) in nearly every speech he has made in the last 18 months. While addressing the International Rehmatul-lil-Alameen (PBUH) Conference last month, he reaffirmed his government’s resolve to establish an Islamic welfare state on the model of Madina. As suggested by the prime minister in a separate tweet, the state of Madina was founded by the Prophet (PBUH) on modern principles of state-building, including compassion. Council of Islamic Ideology is already working on a comprehensive plan for the creation of Madina-like state.

Wages, mainly minimum wage, are a critical redistributive tool and a step towards the welfare state. If wages are determined considering all relevant criteria and are paid as notified, these can reduce working poverty rates in the country. This article reviews the issue of wages in Islamic legal thought. Certain guiding principles can be identified from the Quran and Sunnah. These principles can be used by the government to initiate legislative and institutional reforms in the country.

First, wages are a right, not benevolence from the employer. The Prophet (PBUH) never withheld the payments of a worker and never paid less than what was due. Anticipating modern notions of express or implied contracts of employment, the Prophet (PBUH) also forbade the hiring of a worker without the prior fixation of wages. The above instances show that a worker should be explicitly told about the wages, receivable on completion of work. This specification of wages can either be in oral or written form.

Second, wages must be sufficient to provide the basic necessities of life for workers. In this sense, Islam talks not only about a minimum but also a just and ‘living wage’. Various Quranic verses indicate that compensation should meet at least the cost of basic necessitates following the norms of the time and place.

Different traditions from the Prophet (PBUH) deal specifically with such issues. The Prophet (PBUH) said that “an employee (male/female) is entitled to at least moderately good food and clothing and not burdened except what he/she can bear” and “make them (your workers) satisfied concerning their basic needs.” We find references in the earlier Islamic history that Caliph Umar fixed the wages for military personnel. During his period, salaries were also revised based on several criteria such as length of service, best performance, and knowledge level. Salama bin al-Akwa relates that he was given two shares from war booty (in the Battle of Du Qarad) due to his exceptional performance and the Prophet (PBUH) announcing him as the best footman.

Third, wages should be set, keeping in view the prevailing conditions such as inflation, regional price differences and workers’ needs. It is related that Umar used to determine wages according to the conditions prevalent in the city and the employees’ personal needs. The Prophet (PBUH) gave double the share in ghanimah (war spoils) to the persons with families compared to unmarried persons.

Fourth, wages must be paid on time. It is narrated that the Prophet said, “Give employee his/her wages before the sweat is dry on him.” In another hadith, it is related, “The rich, despite his riches, cannot delay payment to the worker, for it is a crime.” These Ahadith show the general principle that wages need to be paid promptly, and an employer cannot unduly withhold the wages of an employee. However, workers and employers can negotiate the payment of wages on daily, weekly, fortnightly, or monthly terms.

Fifth, wages must be paid in full without any excessive and illegal deductions. Quran says that “Never will I suffer to be lost the work of any of you, be he male or female” (03: 195). Prophet (PBUH) said that “Allah would be the enemy of three persons on the day of Resurrection and one of them would be the one who hired somebody for some stipulated wage, took full advantage of his labour and then did not give him his due.” The third person is compared in hadith to the one who made a free person a slave and sold him for money. This hadith shows that not only should a worker receive full wages for his/her work, but it also prohibits forced labour.

Withholding a person’s remuneration is considered one of the gravest sins. This hadith also sheds some light on the issue of wage theft. Workers have the right to payslips indicating the pay scale and any deductions since Islam requires every financial transaction to be in written form.

A question related to equal pay is whether Islam allows for the difference in wages. Wage differentials occur due to a variety of reasons. The Quran recognises differences in wages and allows for such wage differentials when these are based on competence (28:26). Islam does not require strict pay equality. Instead, it approves of earning diversity (04:32) when it is based on expertise and skill, thus justifying incentive pay systems.

Finally, Islam provides for equal pay for equal work. Allah says that “I never cause loss to the labour of a worker, be that male or female” (03:195), and in another place, He says that “to them, we shall pay the price of their works and they will not be paid diminishingly” (11:15). The principle of non-discrimination is also substantiated by the last sermon of the Prophet (PBUH) where he declared that “No Arab has superiority over any non-Arab and no non-Arab has any superiority over an Arab. No dark person has superiority over a white person, and no white person has any superiority over a dark person. The criterion of honour in the sight of Allah is righteousness and honest living.” It is the skill and performance of a person which is relevant in determining wages rather than race, colour or gender.

Labour Force Survey 2018 indicates that 50 percent of the workers receive less than the minimum wage in the country. There is yet no central anti-discrimination legislation requiring equal pay to men and women workers for work of equal value. The minimum wages are set and revised arbitrarily by the provincial governments without taking into account the basic needs of workers and the cost of living. Employers pay wages to workers by making illegal deductions and withhold wages for longer periods. Even when minimum wages are set by the government, these are determined without proper consultation with stakeholders, i.e., workers’ and employers’ organisations. The ideal of state of Madina cannot be achieved without following the basic tenets on which that model was built.

This article was published in TNS (The News)

Is GSP+ status under threat?